The recently inaugurated Kundli-Manesar-Palwal (KMP) Expressway in Haryana is not only touted to lessen the commute time between Kundli and Palwal and mitigate the aggravating pollution levels in the region but also revitalize the real estate growth in the areas of Kundli, Sonipat, Jhajjar, Gurgaon, Mewat, and Palwal.

The long-stalled, Kundli-Manesar-Palwal (KMP) Expressway has finally seen the light of the day and is available for public use. Missing multiple timelines, the authorities took close to 15 years to complete the project. However, the expressway is fully operational now and is expected to be a game-changer for the micro-markets alongside.

The 136 km-long expressway originates from Kundli (near Sonipat) and terminates at Palwal via Manesar (Gurgaon), connecting four important National Highways (NH) – NH 1, NH 2, NH 8, and NH 10. While until now these areas were thriving on the back of domestic demand, the infrastructure boost will lure investors from overseas too. 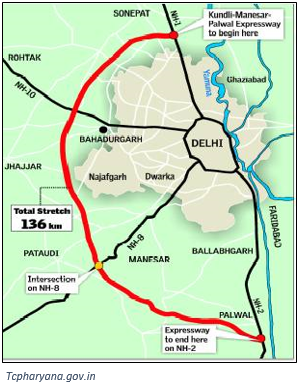 Overall, the expressway will trigger multifaceted growth – industrial, economic and real estate. Sonipat and Manesar, which are amidst the largest industrial hubs of Haryana, are expected to witness a massive boost with improved connectivity. Many reputed brands such as Atlas, Hilton Rubber, and ECE have already established their manufacturing plants in these areas, and several renowned brands are mulling to foray into the region backed by reasonable land prices and improved infrastructure.